Walkable streets, alleyways, and strong connectivity are fundamental building blocks of a successful downtown. They encourage a vibrant downtown and create a strong, local economy. By focusing on placemaking and streetscape projects, as well as targeted spot-improvements, the community can take key steps towards enhancing street life and improving overall walkability and connectivity downtown.

Taos MainStreet has taken some initial recommendations from the Strong at Heart report and is beginning the incremental work required for these major projects downtown.

In 2021, Taos MainStreet began work on downtown Taos alleyways. We started with an initial assessment of downtown alleyways that were identified in Strong at Heart. The list of alleyways from this report was whittled down to the essential alleyways of downtown. 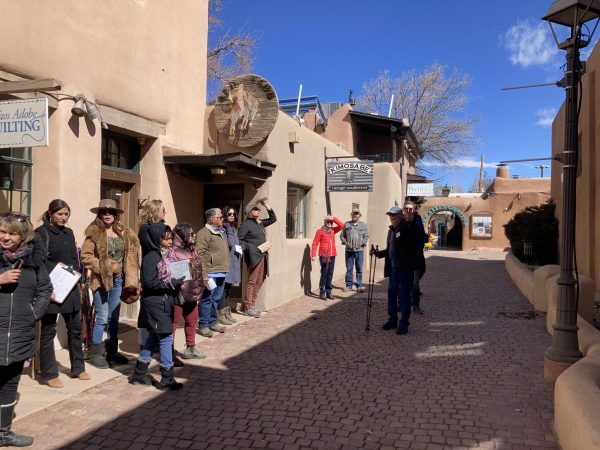 Through technical assistance from New Mexico MainStreet, Groundwork Studio helped us create a website with information for the public on downtown Taos alleyways, as well as an interactive map for the public to insert their comments.

We held two walking tours on March 22, 2022 of downtown alleyways for stakeholders to learn about the background of this project, as well as to voice their concerns and ideas for alleyway improvements.

The walking tours and the interactive map resulted in many recommendations for specific alleyway improvements. These comments were taken and analyzed by Taos MainStreet and Groundwork Studio to identify three priority areas to begin work on first. The three areas that were identified as high priority to address, based on our assessments, include: Bent St, Des Georges, and Tuesday Morning to Taos Plaza connection.

All of this information is being compiled into the Taos Alleyway Network Project Report, which will be available shortly.